A GOOD CRY OVER A BAD ELECTION

I’ve gotten so angry over this election. I’ve been enraged about the things Trump has said, done, and proposed. I’ve been disappointed by many of the revelations that have come to light regarding our former Secretary of State. And I’ve been beside myself as I see streams of hateful words and ideology spring from the mouths of fellow citizens.

Awash in confusion and anger, I read some friends’ posts on FB and wonder, Really? I read the newspaper and feel claustrophobic. Except, unlike claustrophobia’s remedy, there is no viable breathing room that could take away that closed-in feeling during this election.

I don’t know anyone who isn’t longing for November 8th to come and go. But, truth is, no matter who wins, it won’t solve the emergent problems in our country. The unrest and mistrust that have surfaced during this campaign is stunning. Maybe the system was already broken, yes, it probably was already broken, but the vastness and depth of that seepage blows my mind.

This morning, instead of anger, I had a good cry. I cried because our country is so divided, because so many people hate each other’s guts right now. I cried because this isn’t the vision of America that I hold dear to my heart. I cried with the realization that our differing beliefs could incite so many hurtful words and actions. I cried because, by holding each other hostage, we ironically perpetuate the pain we are desperately seeking to avoid.

It’s devastating that we have collectively lost sight of the fact that not only are we all Americans, but we are all humans. That we are in this web together, bound more by our similarities than our differences. We all want happiness and peace in our lives. We all need food, breath, and love. There isn’t one of us that doesn’t share the same air or the same basic vulnerabilities.

There is a light at the end of this tunnel. That I am sure of. Anger is sometimes necessary because it motivates us to change things, to seed activism. But chronic anger, with few meaningful outlets is a trap. The time to switch gears is now.

It’s time to reinstate our faith that we can get through this thing together, even if we disagree. It’s time to refocus our attention from what divides us, to what brings us together. 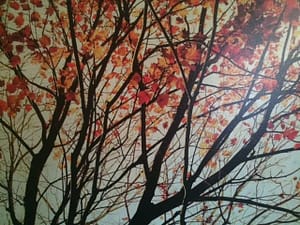 We all want the best for our families and our country. No matter who you vote for, now is the time to let more light in through the cracks. Now more than ever, we are called upon to be clear and level-headed and compassionate. And between now and then after November 8th, let us draw upon our hope and determination that our country will not only heal its fractures but will emerge stronger and more cohesive than even before this whole mess started.