Feeling Stressed About This Election?

Feeling stressed over this election? I personally have lost sleep over it, lost friends over it, and have experienced a level of anxiety unparalleled since we were placed in lockdown during the search for the Boston Marathon bomber.

Going well beyond the typical election, the fear, mistrust, and anger these campaigns have unleashed is unnerving. It chills me to the bone to hear the newly emboldened voices of hate, including the Klan, anti-semites, Islamaphobes, and misogynists, to name a few.

And if you’ve noticed that you’re more irritable and on-edge these days, you’re not alone. The American Psychological Association (APA) recently revealed that almost 60% of Americans surveyed indicated that this election is a significant source of stress. No one is immune– Republicans and Democrats alike reported similar levels of stress.

The study, however, was conducted in August, well before the Access Hollywood tapes came out. It’s likely that had they surveyed the 3,500 Americans today, they’d find the stress levels have gone up. Way up.

Thing is: there is not much we can control in this race. The lack of control over something this important can easily lead any of us to feel powerless, and anxious. We can even feel really angry towards those who don’t agree with our perspective. Add it up, and it’s a recipe for feeling stressed out.

So, how do we protect ourselves from getting emotionally banged-up over the next several weeks? How can we handle stress so that it doesn’t cloud our mind with fear and loathing, to quote Hunter S. Thompson?

Here are several, relatively easy and low-cost ways to counteract the stress. You’ll notice that none of them has to do with changing anything external. The suggestions below are aimed at helping us manage the one thing that we really can control: the freedom to choose what we think. Even if some of the grown-ups in the room have lost their collective minds.

M. Mini-Meditation. Before you get out of bed in the morning, give yourself five minutes to do a quick meditation. Yes, your mind will wander; that’s expected. Gently but firmly bring your thoughts back to a focal point—either your breath, or a mantra such as “peace”, “relax”, or whatever word makes you feel centered. In study after study, including work at UC-Davis by MacLean (2010), meditation has been shown to improve our power of concentration as well as build the “letting go” muscle. This is because we let go of random thoughts and purposely focus our minds on something calming. Five minutes a day. If you don’t have five in the morning, try five when you go to pick up the kids from school, or five before bed.

I. Integrate a Yoga practice into your life. Restorative yoga, or any yoga that helps you feel calmer. Even ten minutes a day will help release the tightness that settles in the muscles when we get stressed.

Pair your home practice with something else that is non-negotiable, like brushing your teeth. Think, after I brush up, I’ll practice for ten minutes. A full class is great too. If you can’t come to one of my classes on a Wednesday or Friday mornings, check out on-line yoga (like www.yogaglo.com, or www.yogatoday.com), or other studios in your area.

N. Nap. As in, mid-afternoon, 15-20 minutes. This type of self-care helps us feel more aware and alert, less stressed and according to the National Sleep Foundation, puts us in a better mood. Think of it as an investment in the rest of your day.

D. Deep breaths. Inhale deeply. Exhale slowly. This is so good in terms of accessing the relaxation response. Among other things, deep breathing activates the vagus nerve, which helps switch the nervous system from fight/flight/freeze to a more relaxed awareness. Additionally, it boosts our immune system and releases anti-stress enzymes. Do it anytime.

F. Friend. Treat yourself like you would a good friend. I’d been seeking media info on this campaign the way a junkie seeks a fix. Kind of addictive. But, it didn’t help me feel secure, or peaceful, or happy. Instead, my fear-based-news-obsession revved me up. Treating myself the way I would treat a good friend means I’d encourage myself to get off the computer and get some fresh air, take a walk, eat something nourishing.
This thinking is consistent with the APA’s suggestion to limit exposure to media coverage during this election. It’s like breaking a habit. And worth it: Selectively attending to the news can have a powerfully positive effect on us and our families.

U. Unselfish acts of charity. There is substantial evidence, including work by Konrath (2011), that altruistic behaviors are linked to better health outcomes. Giving away your time or money honors the fact that, as the Dali Llama suggests, we are all interconnected through our vulnerabilities and our wish for happiness. This in and of itself can have a soothing effect on the nervous system.

L. Laughter. Laughing releases good-feeling hormones, such as dopamine, endorphins and nitric oxide. These are the same hormones that not only combat aging, but also help us feel less stressed. So, grab an old comedy that you love, or a funny friend that you love, or listen to The Dean Obeidallah Show on Sirius XM—something, anything that makes you chuckle. Some swear by Laughing Yoga; if you try that, let me know what you think.

To de-stress, you needn’t do all of these at once. Think of this list as a set of choices that you can pick and choose from when you’re stressed about this election, or stressed about anything, really.

Reach for the one that comes to your mind first. The more we drop down and listen to our internal messages, the more we access our own innate wisdom. As this election has undermined trust at a national level, cultivating a deeper trust of our own mind and body is vital to making it through this month unscathed. 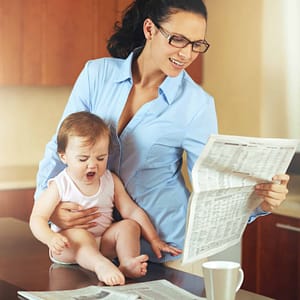